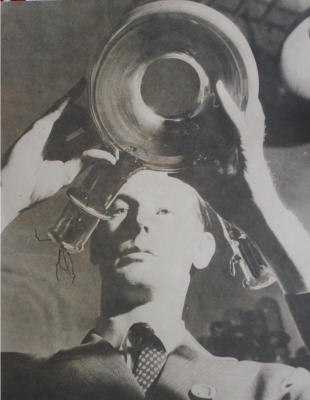 Following the publication of an article in the Washington Post on his cyclotron program, Tim was contacted by local Silver Springs resident, Steven Kerst. Steve had a large box of documents, letters, and photographs that had belonged to his father, Donald W. Kerst, and he thought Tim just might be the right person to have it. Tim, of course, enthusiastically accepted.

While not a house-hold name like some of his colleagues from WWII, Donald Kerst was a prominent twentieth century American physicist who made innumerable contributions to the fields of particle and nuclear physics throughout his career. He is perhaps most well known for his invention of the betatron, and early particle accelerator, which uses magnetic induction to accelerate electrons to high energies. While the idea of a betatron had been an idea and goal in particle physics for nearly two decades, Kerst was the first to build a functioning devices in 1940, which he accomplished during his first two years as faculty at the University of Illinois.

The original betatron is a small device comprised of a doughnut shaped glass tube sandwiched between two magnets. This first device, which first successfully functioned on July 15th, 1940, was capable of producing 2.3MeV electrons. A series of larger devices were built in the following decade eventually resulting a betatron capable of producing 300MeV electrons. The original betatron was featured in a long running exhibit in the Smithsonian’s National Museum of History and Technology (now the National Museum of American History) and is now in storage at one of the Smithsonian’s remote warehouses.

The betatron found several practical uses outside of particle physics studies. The high energy electrons could be used to produce x-rays with higher energy than was commercially available by any other means at the time. Betatron-produced x-rays were used in manufacturing as well as in medicine. While the potential treatment of cancer with targeted radiation was known, the higher energy x-rays made possible by the betatron, were required to penetrate the body to treat cancers not found near the skin’s surface. Betatron-produced radiation treatment of cancer was used in hospitals well into the 1990s.

Like many of the prominent American physicists, during the second World War, Kerst was called away from his own research and asked to participate in the Manhattan Project. Donald Kerst and his wife Dorothy moved to Los Alamos, New Mexico where Kerst was put in charge of building the world’s third functioning nuclear reactor: Water Boiler. Water Boiler went critical on May 9th 1944 with Enrico Fermi in attendance.

After the war, Kerst joined a group of physicists around the country who wanted to continue the collaborative efforts of the scientific community that had begun with the Manhattan Project in order to tackle other fundamental challenges in particle physics. The result of this collaboration was the Midwest Universities Research Association (MURA) which engaged the American physics community in the development of advanced particle accelerators until 1966.

After several years serving as Technical Director of MURA Kerst and his family moved to San Diego and Kerst began working on plasma research at General Atomic. Eventually Kerst excepted a faculty position in at his alma mater, the University of Wisconsin, Madison where he continued with his plasma work for the remainder of his career. Donald and Dorthy retired to Florida in 1980 where Kerst pursued his hobbies of sailing and nautical navigation. Kerst passed away on August 19th 1993.

The collection of materials given to Tim by Steven Kerst spans Donald Kerst’s life and career. Among the more significant items in the collection are:

We plan to digitize and make a large amount of this documentation available for public use. Check back for links to these databases (or reach out to us directly)!