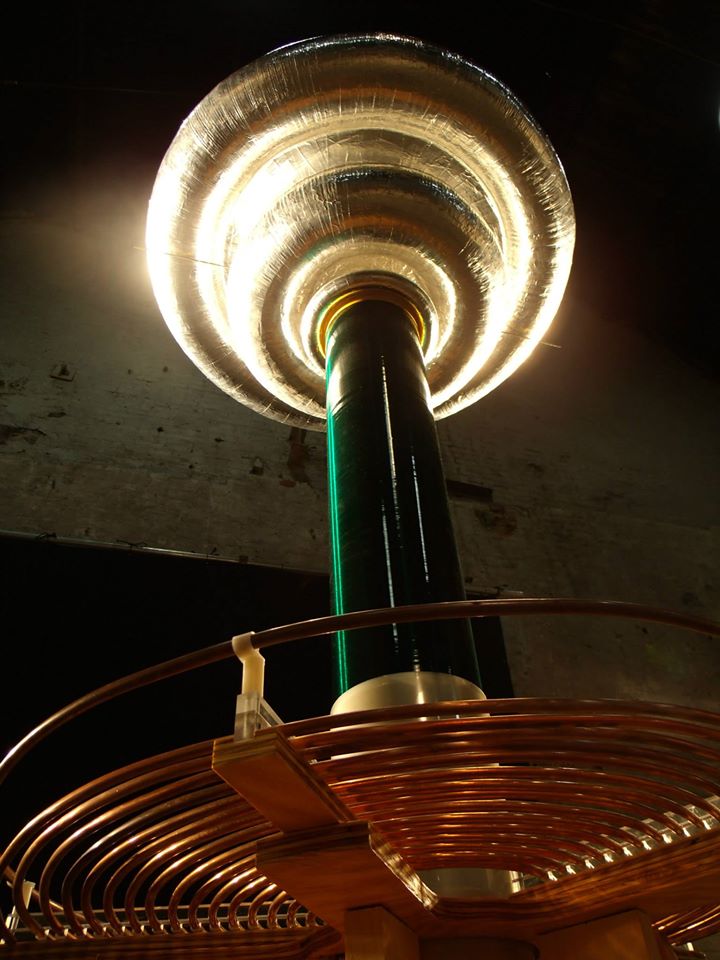 The Megathron-Gigathor, (or so Tim has dubbed it). Is the largest tesla coil I have built. It is the culmination of a few years worth of parts collecting, and several more years worth of upgrades. It was completed in the 2011-2012.
was featured in a music video titled Cymatics, and continues to impress to this day.

The secondary self resonates around 60khz
The tank capacitor is 0.1uF
It is powered via a 10KVA pole transformer (run at 20KVA)
If I ever find the JAVA TC file, i will post the parameters. Its been a couple computer migrations and crashes since its creation.

It took my brother an I almost 6 hours to wind the secondary with #26 magnet wire. It has 4 coats of polyurethane.

It was found pretty quickly that this toroid was way too small, the coil thirsted for more capacitance to drive. Thus a much larger one was made and the two were stacked. This stacked configuration works very well.

With a combination of taps and series parallel, I can ballast form 100A to 5A at 240V. These will soon be replaced by a single larger ballast.

Gap mounted in the Tesla Coil’s base

The spark gap has 2 rotors on a common shaft, these are run in series, which aids in quenching. There are 24 stationary electrodes, enabling very high breakrates. This was originally intended to be a DC coil, where high breakrates would be ideal. But I have not yet run it in a DC configuration.

The whole coil sitting in my garage.
Yes those are sprite cans used as a spacer between the stacked toroids.